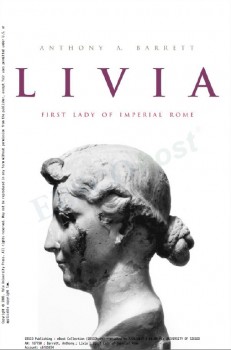 Livia (58 B.C.A.D. 29) the wife of the first Roman emperor, Caesar Augustus, and mother of the second, Tiberius wielded power at the center of Roman politics for most of her long life. Livia has been portrayed as a cunning and sinister schemer, but in this biography (the first in English devoted to her) Livia emerges as a much more complex individual. Achieving influence unprecedented for a woman, she won support and even affection from her contemporaries and was widely revered after her death. Anthony A. Barrett, author of acclaimed biographies of Caligula and Agrippina, here examines Livia’s life and her role in Roman politics. He recounts the events of her life, from her early days as a member of the wealthy and powerful Claudian family through her final conflicts with the new Emperor Tiberius. Barrett also considers how Livia helped shape the pattern of Roman government that prevailed for the next four centuries.