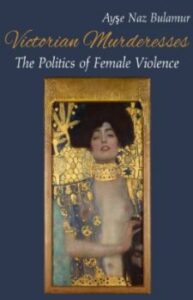 Victorian Murderesses investigates the politics of female violence in Thomas Hardy’s Tess of the D’Urbervilles (1891), George Eliot’s Adam Bede (1859), Mary Braddon’s Lady Audley’s Secret (1862), and Florence Marryat’s The Blood of the Vampire (1897). The controversial figure of the murderess in these four novels challenges the assumption that women are essentially nurturing and passive and that violence and aggression are exclusively male traits. By focusing on the representations of murder committed by women, this book demonstrates how legal and even medical discourses endorsed Victorian domestic ideology, as female criminals were often locked up in asylums and publicly executed without substantial evidence. While paying close attention to the social, economic, judicial, and political dynamics of Victorian England, this interdisciplinary study also tackles the question of female agency, as the novels simultaneously portray women as perpetrators of murder and excuse their socially unacceptable traits of anger and violence by invoking heredity and madness. Although the four novels tend to undercut female power and attribute violence to adulterous women, they are revolutionary enough to deploy female characters who rebel against male sovereignty and their domestic roles by stabbing their rapists and even killing their newborns. Victorian studies on gender and violence focus primarily on female victims of sexual harassment, and real and fictional male killers like Dracula and Jack the Ripper. Victorian Murderesses contributes to the field by investigating how literary representations of female violence counter the idealisation of women as angelic housewives.